Electrical is one of the few easy areas to find pricing on. The team at Argus Electrical look after all the Pre-sales for the electrical works and are pretty open about the cost but man can it add up.

Dave and I both come from the Live Events Industry. I have a background in Electrical, Lighting, Audio-Visual Event Coordination and have now moved on to IT Sales. Dave spent his youth as a Live Sound Engineer, Production Manager and is now an Operations Manager. What this all boils down to is our house was never going to be a ‘Standard Inclusions’ house when it came to electrical. Ours will be one that you can stream music to any room to help keep the groove going as I clean all those bathrooms and hopefully have the neighbours oooing and arrring at our architecturally designed garden lighting.

Having given an outline of what we wanted to our Sales consultant, he budgeted $4,000 for electrical, Dave and I didn’t think this sounded right and later asked for it to be upped to $7,000. When we started gathering info we quickly knew that we didn’t have enough put aside and in our own spreadsheet up’ed it to $20k early on in the process.

I always knew that one of the biggest problems I would face was getting all the information out of my brain and delivered over to the people taking down my order, without missing anything out.

Over the space of 3 months, I did up my electrical plans, this was so I could add and remove things like power points (not too many were ever removed) and play around with layout and functionality.

In the house we currently live in, there is no a power point in the hallway and man it is annoying to vacuum the common areas when you always have to drag out the extension cord every time.

As a rule of thumb, you receive one double power point per room included in the house. I added a few more and colour coded them so I knew what height they would be located at.

The standard heights are 300mm Above Floor Level (AFL) and 1100mm AFL but Argus will note on the plans whatever height you would like. Which is great as there were a couple of odd heights I wanted, like 1350mm in the pantry for my toaster and 2000mm for a TV in the guest room we wanted particularly high.

Don’t forget about: Hallways, either side of double vanities, at the end of the kitchen island, either side of the bed – can the bedroom we turned around and the bed head run along the other wall? If so, accommodate for a third power point to allow for this new layout. Future lamp positions, power near future desks positions in bedrooms or games rooms. Heated towel rail locations. Alarm monitoring unit location. Under the bench in the kitchen for the wine fridge, above the bench in the laundry for the iron to plug into. Future spa connection, future air con unit. Do you have wall mounted TV’s? Then make sure the PowerPoint is around 1600mm AFL, not 300mm. Do they all need to be doubles or can some of them be single outlets?

And the big one… Christmas lights!  We have put a few outdoor power points in that are controlled by a switch in the garage, this means that I can turn on and off the Christmas lights without going outside. One under the 2nd story eaves, one under the portico and one down the side of the house by the fuse box. No more cables running through windows or ugly runs of extension cords snaking out of the garage.

We decided that we would do all the downlights throughout the house now, rather than leaving the upstairs as batton lights and upgrading them later. We have been into a few Forysths that are being built and seen that there is bugger all roof space left with a 22.5-degree roof pitch. Especially after all the ducts and vents are in, I cant see how someone can move around up there easily without disrupting or damaging things.

We also find it amusing to see so many houses for sale, where the upstairs has been left as batton lights with chinamen’s hats. It’s obvious that they intended to change them over to downlights but never got around to it or ran out of budget.

When working out the lighting, make sure you decide what your light groupings are and switch positions. Which groups do you want with two-way switching, do you want any rooms to have dimmers. Don’t forget to add a light switch by the master bedside table.

We have a motion sensor on the front porch for the portico light, coming home late and fumbling in the dark for the key is never fun. 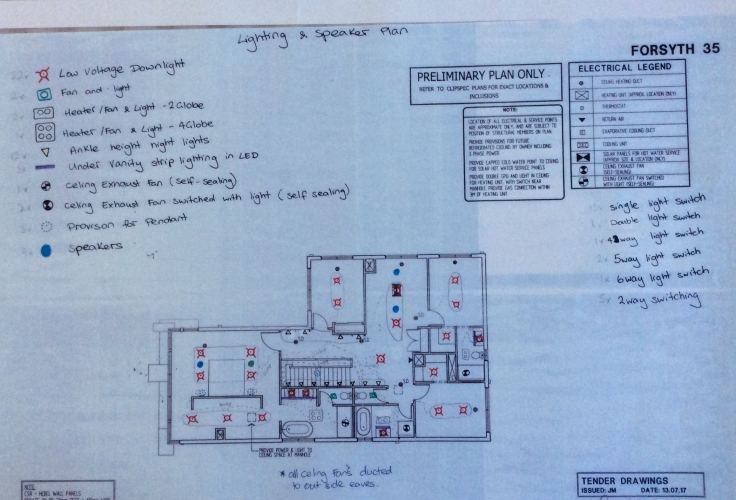 We went into our Electrical appointment early, all of our choices were made and we spent the whole time transferring information off of my plans and onto theirs, even so, we went over time and worked through lunch, only stopping because our kitchen appointment in the afternoon was ready for us. We left our wonderful Argus Electrical lady with the rest of our requirements and she finished off entering it all in and tiding up the plans.

And here is what it looks like, all pretty.

They have the type of floor plan software, where when you select a symbol, it adds the line item and cost to the spreadsheet. so in the appointment, you spend the time looking at the plan and adding things visually. 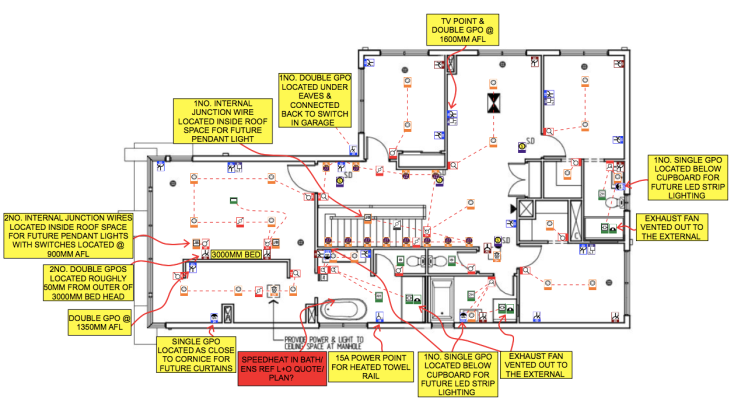 If we were allowed to run the cables ourselves we would have and also put a couple of hundred more metres into the house. However, PD doesn’t let you and their cable cost are rather on the high side. If we could have, we would have used different cables for the speaker control. However, as its a closed building site, Cat 6 cabling was really our only option. We will be utilising some excellent distributors and receivers and the main patch panel and control systems will live in the garage, giving us future proofing and flexibility for each room in the house. 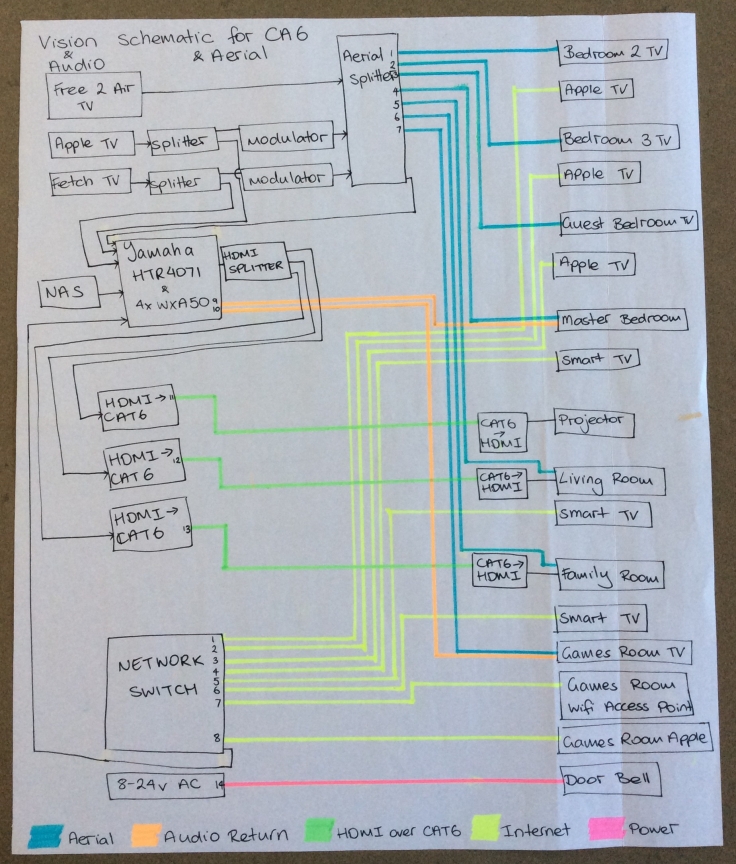 As Dave is still in the Audio- Visual industry and I am in the IT industry, we can buy most of the equipment at wholesale rates and install it ourselves. Things like projectors, rack units, splitters and access points are all daily inventory for us.

An example of this is projectors, we skipped the projector provisioning and domestic PJ unit Argus offered and opted to run a cat 6 cable and powerpoint instead. We worked out the projector lens throw distance for the screen size we will install and had the plan marked up accordingly so the power point will be in the correct location on the ceiling. We will install a motorised screen that will be hidden inside a flush mount ceiling box and attach the projector and bracket ourselves.

As for the audio

Each room can be controlled separately or linked. We will be using the Yamaha MusicCast system. All amps will be located in the garage and the signal distributed out from there.

This means I can soak in the tub and listen to whale songs while the boys are watching the game downstairs on the projector and 5.1 surround sound and upstairs in the games room the kids can be watching movies, all controlled off the app on our phones.  Which also means when the kid’s TV get to load, I can turn it down without leaving my happy place.

Bathrooms and smaller bedrooms will receive a wireless speaker that will use MusicCast as well, they are portable so can move around the house as needed. 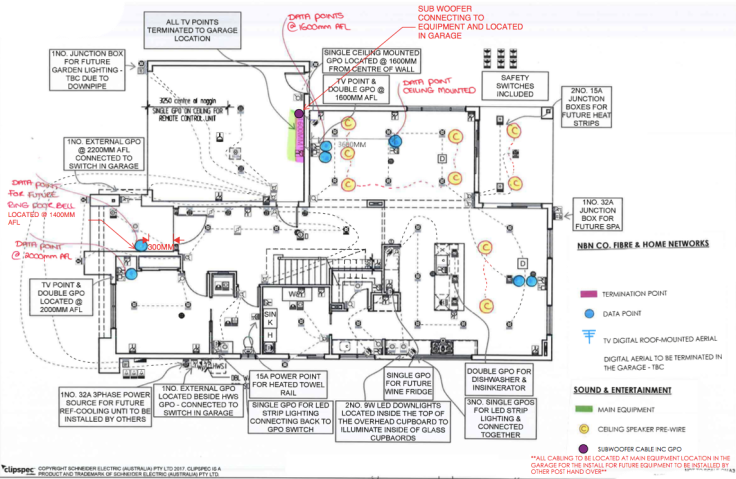 Because we are doing AirBNB and have so many bedrooms, we have opted to have a TV point in each bedroom, except Bedroom 4 which will be the baby room and has no suitable walls to house a TV. We will also have an Apple TV connected to each bedroom TV, later this may change to smart TV’s which we have provisioned for. However, for now, this will allow guests to connect to TV shows and Youtube etc from the comfort of their bedrooms.

This all connects via the aerial splitter in the garage, that has free to air connected and via modulators, Fetch/Foxtel and another Apple TV. Infra-red sensors will be located in the Lounge and Master bedroom to control the 2nd Apple TV and Fetch box.

PD offers a really ugly and surprisingly expensive doorbell option. We like the RING doorbell and currently use it but would like it hardwired into the new home.

We couldn’t get PD to install a standard 12v cable run from the garage to the front door for us to power it and instead have opted for another Cat6 cable run which we will use to power the doorbell.

Below is a list of the prices for all the equipment Argus Electrical and Porter Davis are putting into our house. Hopefully, this will help others with 99% of their pricing needs and they can budget correctly and not be lead astray with a Sales Consultant only budgeting $4k when it really should be $20k. 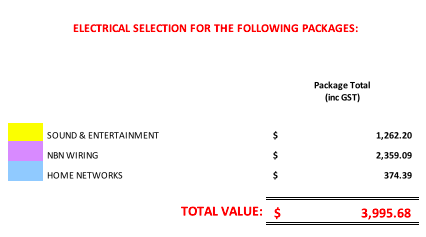 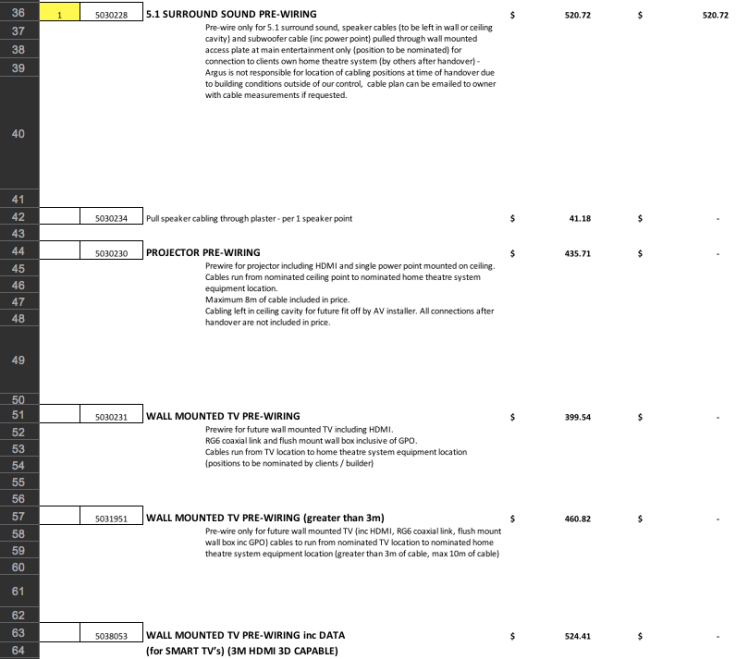 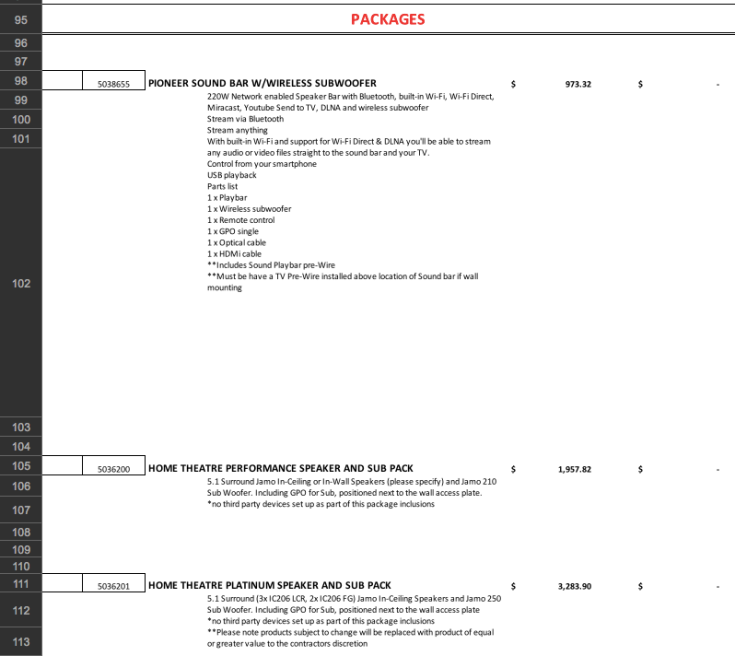 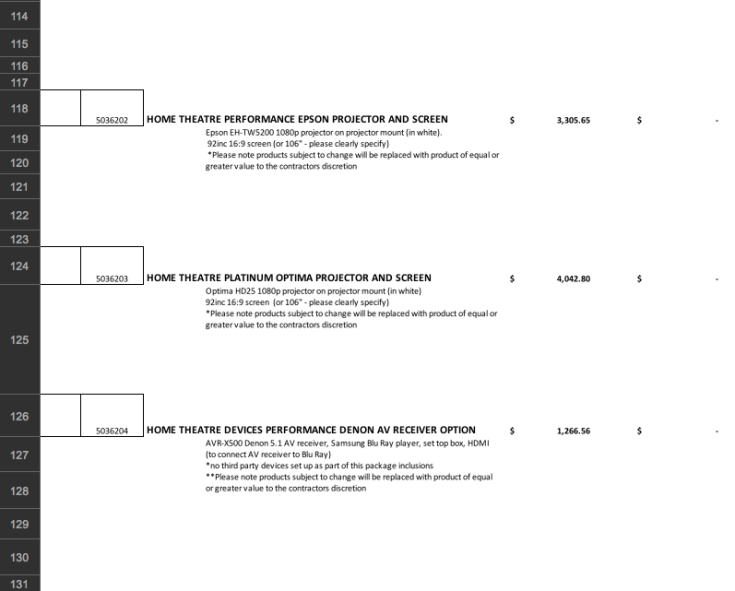 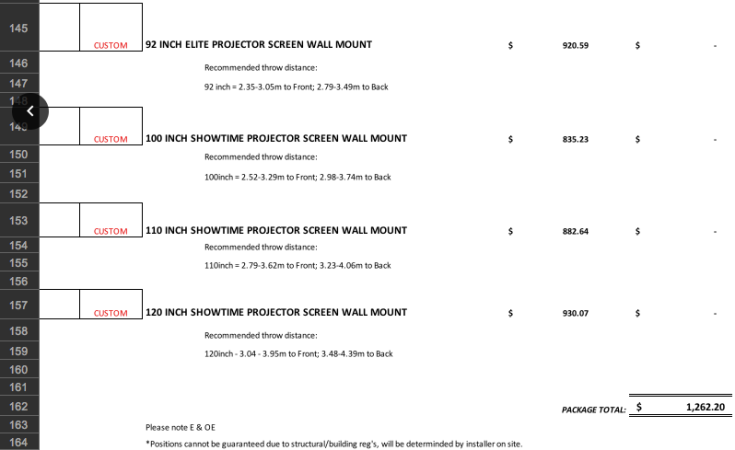 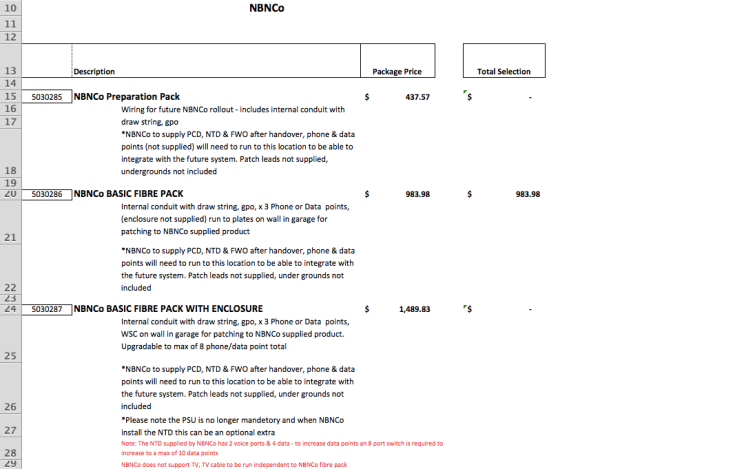 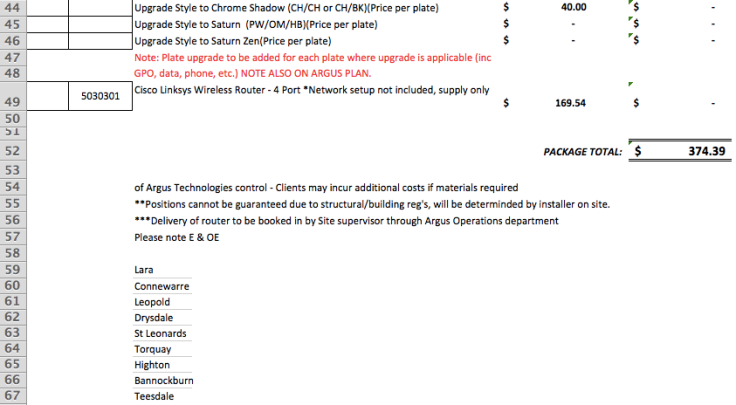 The below sheet is priced up a little odd, the far right column totalling at the bottom is the builder’s inclusions but the Variations and unit costs total to the top $18k. 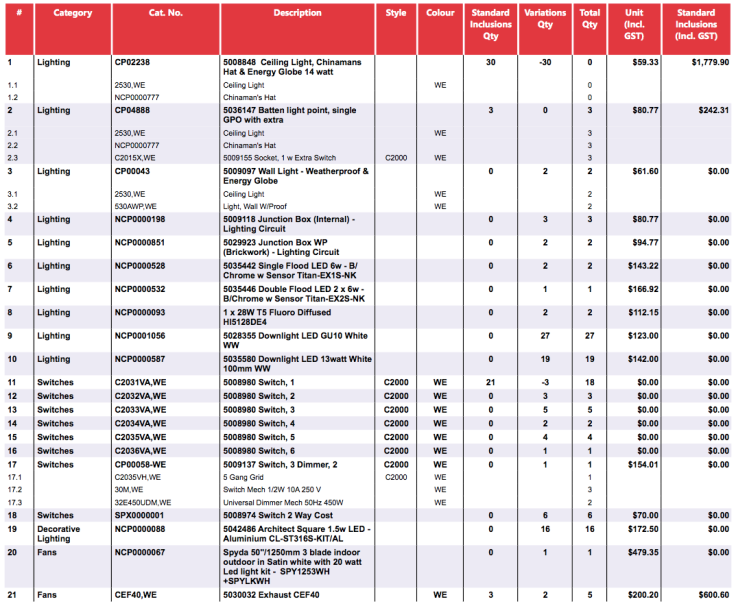 13 thoughts on “Let there be light”