There is nothing worse than getting into a shower and finding that you have to bend your knees just to be able to get your body under the shower head.

The Porter Davis standard is to have the shower rose and screen at 1800mm AFL, however in their show homes, so often you find the rose at 1800m and the screens at 2000mm. 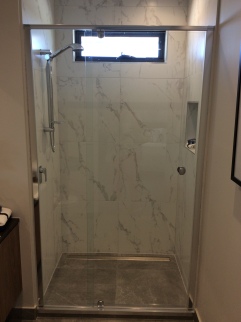 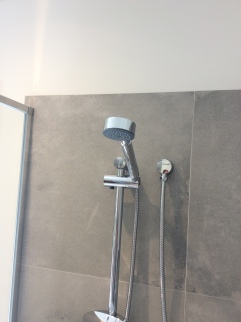 I am 174cm, I was always one of the tallest in my class at school but I constantly meet taller people on a daily basis. When I stand under in a shower, I hate it when I feel like I’m about to smack my head on the shower rose or when it’s to close to my head and it doesn’t have enough distance for the water to fan out and ‘shower’ me with the water.

The average height for a man is 177 cm which is approximately 5 foot 10 inches, those poor suckers only get 3cm of clearance before they have to perform squats in the shower to get their hair wet.

When it comes to selling my house, I don’t want a potential buyer to be put off just because they are 6ft tall and find the shower too short for them. It’s such a simple thing to fix at the planning stage and doesn’t cost anything but a little forethought.

At World of Style, they display the range of different shower heads that are on offer.

The standard in Number 3 (far left) a basic rose attached to the wall with only the tiniest adjustments in the arm to raise or lower it.  Please also note, that this comes with single hot and single cold water faucets.  You have to pay extra to upgrade to a mixer unit.  In some of the Lifestyle and Prestige range homes, these roses and taps have already been upgraded in the ensuites.

We chose to upgrade every shower in our house to option 7. Posh Bristol Rail Shower.

This means that you have extra control over the height as the head of the shower rose can be adjusted on the rail. You also get the added benefit of taking it off the rail and moving it around. 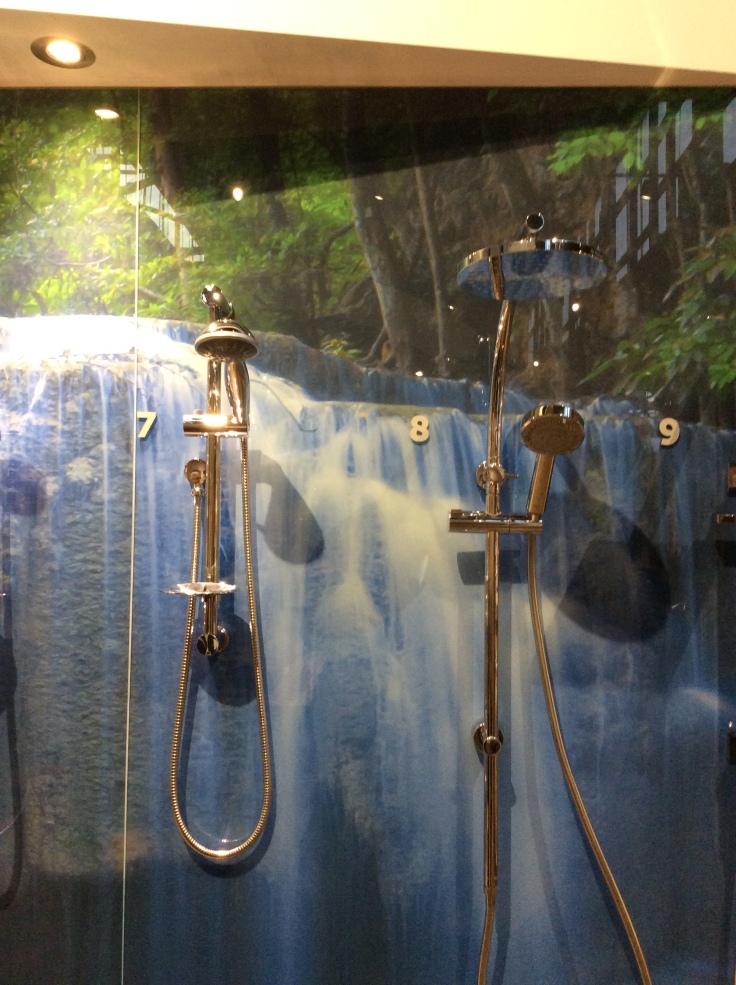 This cost us $28 for each shower, one of the cheaper upgrades in the house.

Changing the rail or rose heights do not cost anything, ask for it before tender or at your WOS appointment and you will find it an easy enough alteration.

One of the things I don’t understand is that you buy a rail so you can decide upon your own personal preference of shower rose height and yet PD still insist on attaching the top of the rail height at 1800mm AFL, this means that you can go no higher than this and defeats the purpose in my mind.

We asked for both our rose rail and shower screens to be at 2 metre high, I didn’t care about the hose outlet on the wall height, but found it easier to ask for them all to be at 2m height as to save confusion.

Getting the plans right – and keeping them correct

We have 4 bathrooms in our house and it seems like every time we got a new set of drawings, someone had played with the rail or screen heights. PD said there was a bug in their software that constantly changing it but I don’t believe that for a second.

It meant that we had to be super vigilant on changes that had been made, checked and signed off on… and then would revert back to an incorrect version later. It meant that every drawing version we would have to go back and double, triple, quadruple check that everything was still correct. Many many times they had to be re-updated. 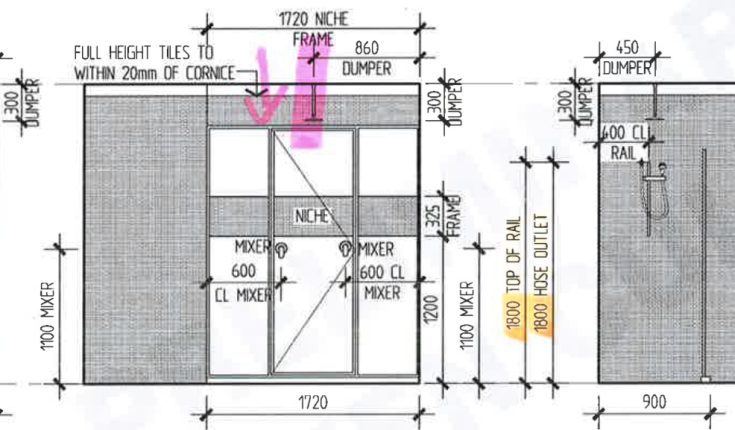 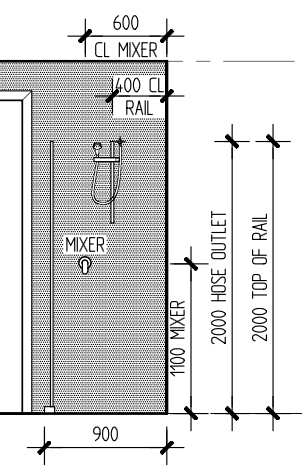 Changing the shower screen heights does cost a little, $147 each to precise. We had one already upgraded due to an Ensuite package we bought and just had to upgrade the other three.

Don’t just assume that because every single display home shows a 2m high shower screen, that that’s what you get as standard. It was only at the end of our research that we found out that what we had assumed was a standard inclusion actually was an upgrade that we did not have.

We only stumbled across this when asking about frameless and semi-frameless inclusions.

Now I’m not sure what is stand policy anymore as when we were going through the process the shower screen provider was changing and none of the staff knew what the new supplier’s screens looked like and the supplier’s website is not very comprehensive.

Framed showers have a metal strip supporting the 90-degree corner. Semi-frameless showers just have the 2 glass sections meeting and the shower door does not have a metal frame around it.

A fully frameless shower screen has no metal but does have a horizontal glass strip along the top for stability. 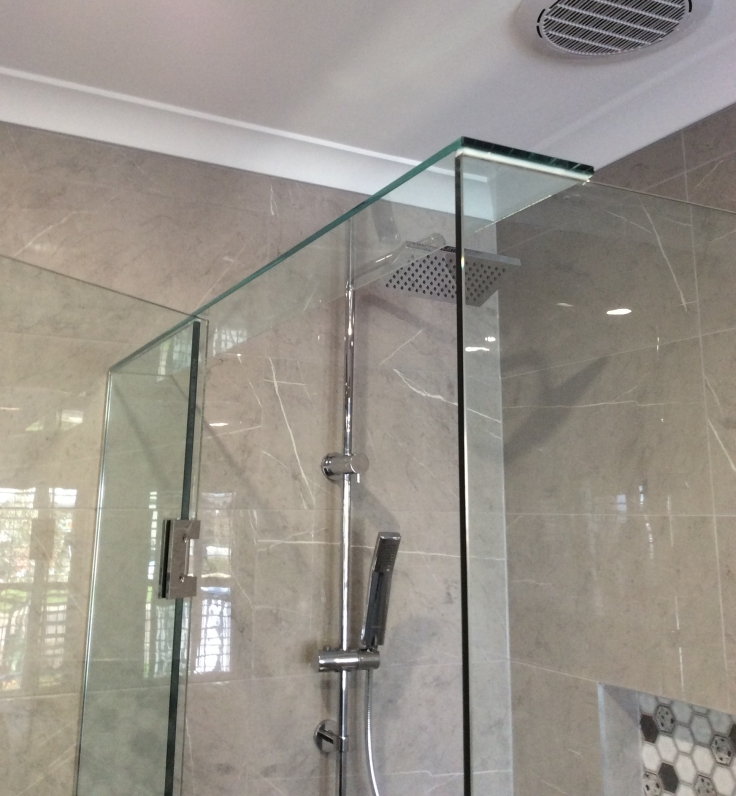 I’m still not sure what I am getting… Just have to wait and see I guess.

It’s hard enough getting out of bed on a winters morning, what is even worse it getting a cold shock of water squirted on you when you reach in to turn on the shower mixer.

In the master we had our mixers moved from the standard location of directly under the shower head, to the side wall. This means that I can reach in and turn on the shower to let it warm up without being blasted with icy cold water in winter.

This didn’t cost anything, however, it does have to be done early on in the process to avoid re-drafting costs. 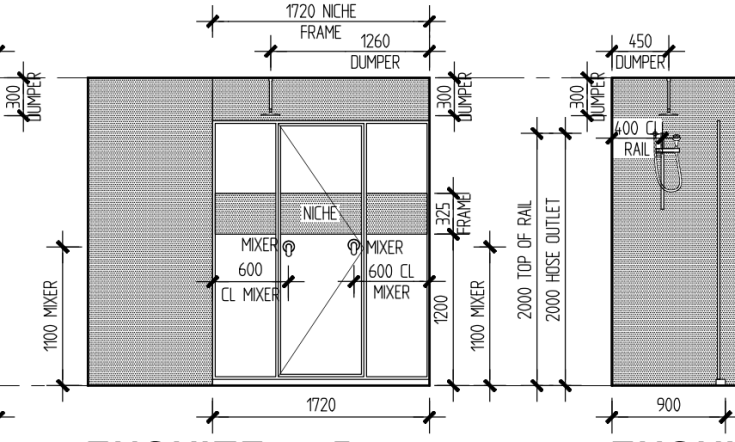 We chose to do floor to ceiling tiles in our bathrooms as I believe it helps give the lux feel and it gives the impression that the wall taller.

If you are going to increase the height of your shower screens, make sure the tiling works with your overall look. 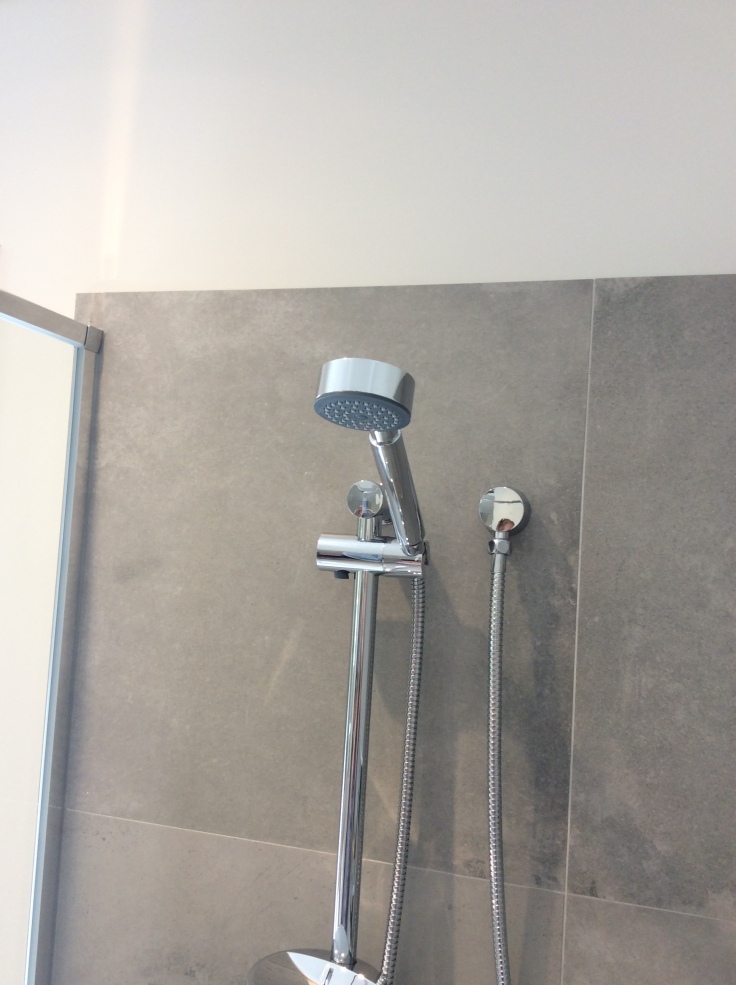 We added a dumper shower into our ensuite. As our shower area is 1720mm wide we felt it would be a shame to not include either dual shower heads or a dumper in such a large space.  Love them or hate them, I didn’t want the lack of a dumper to be the deciding factor for a potential future buyer.

This meant adding in all the plumbing for the taps and shower rose from scratch, below are some costs to give you an idea.

Additional is the key word here, it’s not in lieu of anything. 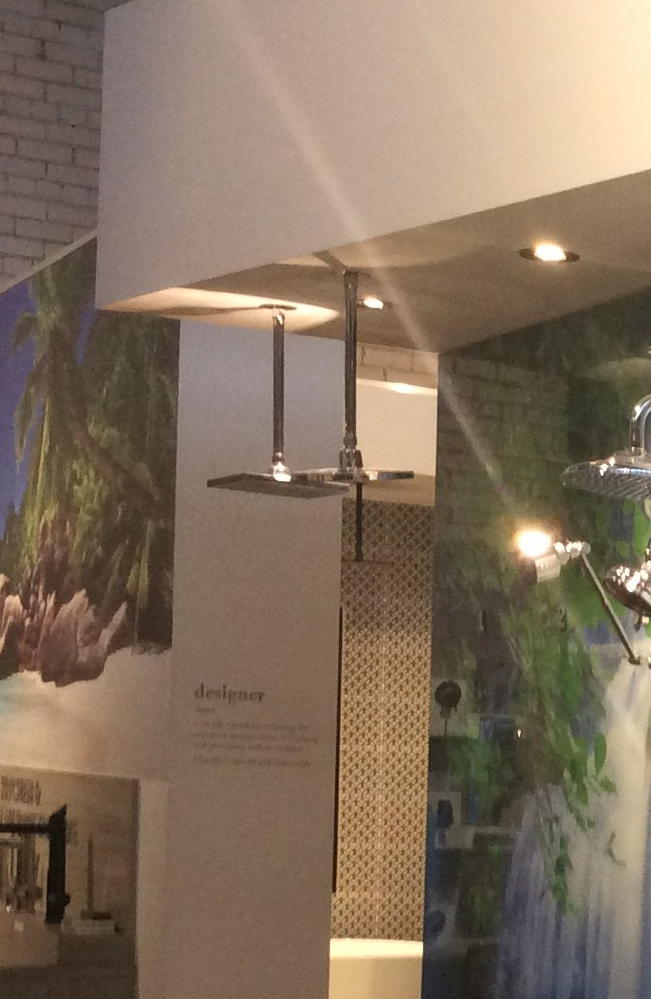 Nothing beats a wonderfully long hot shower to wash away the stress of your day.

Better yet is being able to stand up straight and be rained down on.

Also, while on the subject of showers you might be interested to know more about the niches.  Please head here to find out more – Find your niche

5 thoughts on “A Short Shower”