On the videos, click on the bottom right expansion icon so
the video zooms out and you can view it properly on your screen.

Good news and bad news, the good news is that our garage and alfresco are finally plastered.

The bad news is that after 103days since the scaffolding came down, and the renders could have finished rendering the ground floor, our neighbours have finally built and bricked their garage, meaning a very upset phone call to tell the site super to get the trades to site ASAP. It’s not like we haven’t been pushing him all along. But alas – they get their 1 day too late and only managed to patch up a base coat of render to the top of the garage wall.

We will not be able to have our coloured 2nd and/or 3rd coats of render applied to this wall now. Porter Davis has offered us a credit for the work they will not be able to get done – I would have rathered it just to have been completed – its not like they were pushed for time, 103 days they had to do it. 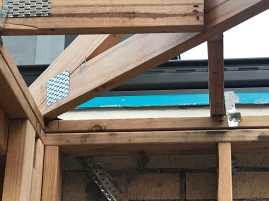 We have tiles starting, and a window that is too far out, is being fixed. They have put the incorrect cabinets back in so the sizing can be given to the tiler – then they will remove them and replace them with the correct ones. 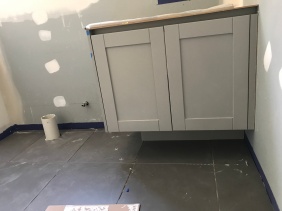 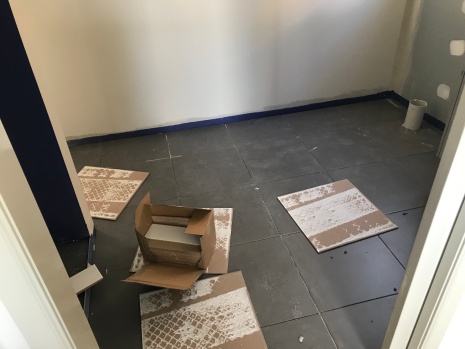 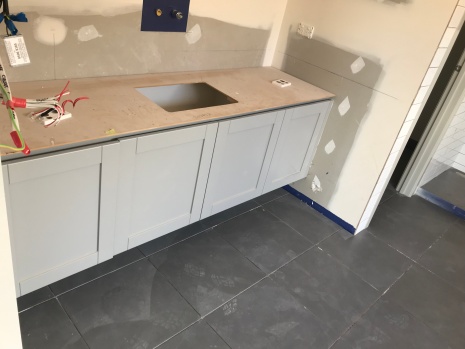 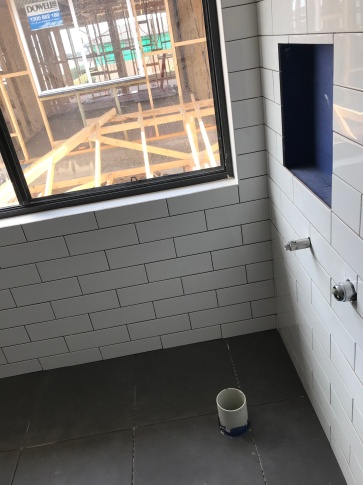 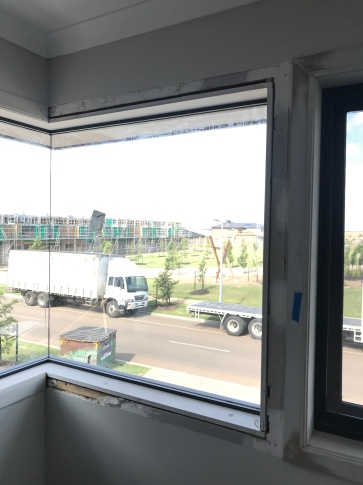 Lots of progress in a short week, facade corers attached, fly screens installed, sliding door log attached in the correct location, range hood power pulled through. Wardrobe/ pantry and linen cupboard shelves and rails all installed. Return air vent was installed on the 28th but don’t think I had a photo of it. Waterproofing finally finished. Speed heat installed. Patster returned and patched up holes that the electricians made in the wrong location.

Window and main bathroom have been patched up

Some progress on site, the heabel patching has mostly been done but not all of it, the waterproofer has returned and done some of the re-waterproofing but not all of it, the master Bathroom still has several very large screws sticking up through the floor from the beams below. The electrical team have been in and finished off the data points downstairs but have not started upstairs (some argument with the insulation guys). Brivis have been in and commisioned most of the ducts and control units but forgot one room. Our stairs had the lights installed incorrectly and now they stop part way up instead of being evenly spread out. Gass to the property got installed.

Very slow progress – why cant tradies come and complete a job instead of having to return time and again – it seems like such a waiste of labour and travel and time.

Why have there been no updates on this blog that I follow???
Well, that’s because nothing has happened on our build!

And we have a Garage roof, flashing and more scaffolding.

Hebel guys – working on a Saturday! They fixed up around the back Alfresco sliding door, above the front pier and had to redo the far right pier as it was out of line. All done now and ready for the renderers.

We have our doors, skirts and Arc’s delivered. We also have a staircase installed!

I hope this guy doesn’t breed… I didn’t have anything on me to scoop him up and remove him – so he gets free room and board for the week.

But we also have a couple of leeks in the kitchen…. 2 separate ones that will need to be attended to as there should not be water inside in these areas.

We also went around and reinstated the writing on the floor so it was still readable.

We were given some leftover sisalation so we did the parts of our garage that PD do not cover.  I think it looks great! 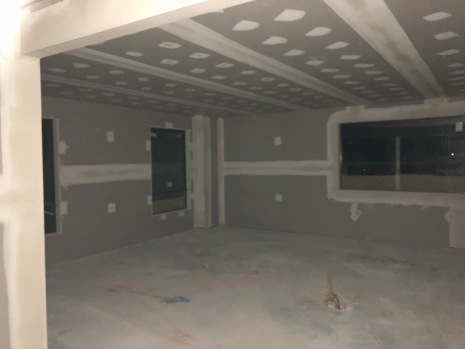 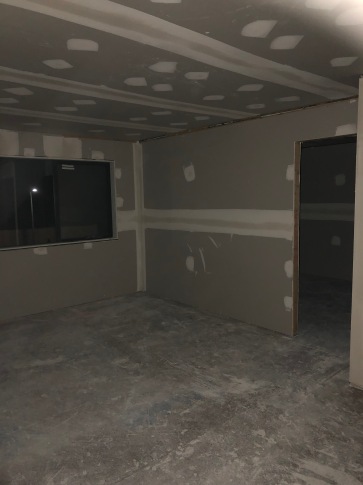 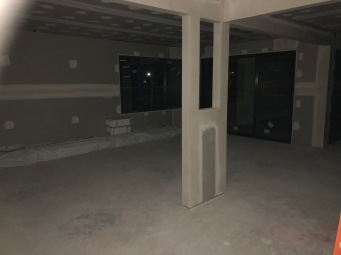 The day and night of the 15th had the rest of the plaster lining installed and all the ‘mudding’ plaster applied. The whole house was compleated in 2 days, something Porter Davis allows 2 weeks for in their timeline. I was in New Zealand during these 3 days but Dave tells me he saw over 10 men working late into the night on Wednesday the 15th – SMASHING IT OUT!!

All the ceiling plater has been installed and Bedroom 2 has some wall plater installed.

Single phase power and refrigerated cooling ruff in compleated. This allows us to add on cooling to the Brivis unit after handover without ugly conduit running up the outside walls.

Orange conduit installed from the meter box up to the roof space and from the roof space down to the sub-board in the garage.
These have string lines inside them and will be used for the solar power cables. Allowing us to run the cables inside them and the wall cavity after hand over, and not have conduit on the outside or opening up the plaster inside and then having to pay for it to be re-plastered and painted later. A little bit of future proofing.

The scaffolding has been taken down, now we can see our house.

All the internal walls have been lined with batts. It makes the house feel like a womb

We have our bathrooms venting to eves, each bathroom gets a mushroom vent on the roof. They are plain silver – not powder coated like the wirly-birds. So we painted them the same colour as the roof, now they look great. 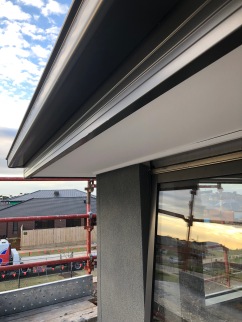 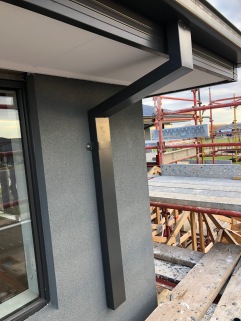 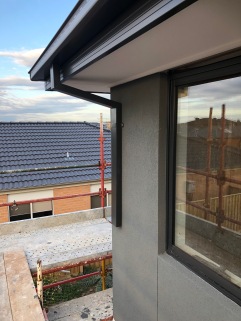 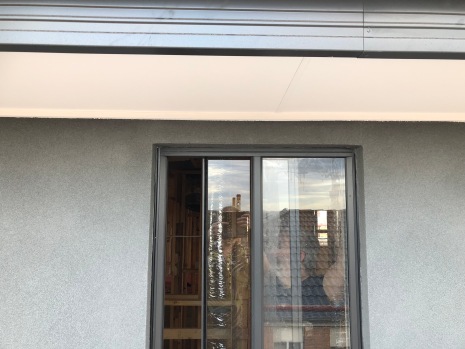 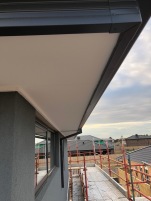 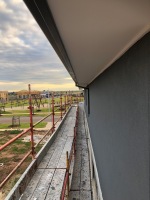 The colour Tea House looks great! We also have part of the downpipes along with the 450mm eves. 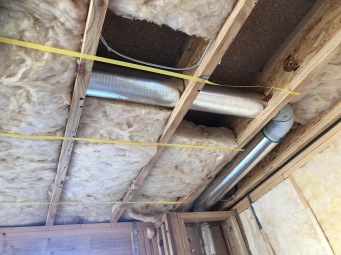 Silver-sided Pipe Lagging installed around the bathroom waste pipe, that runs above the dining room, this is to help with noise reduction then they are in use. 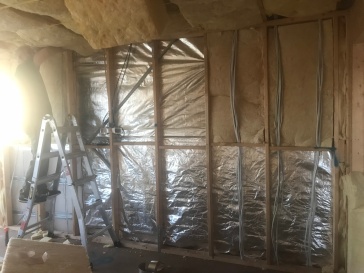 A little missing sisalation added to the Master Bedroom as it was missing a run of it.
28th July 18 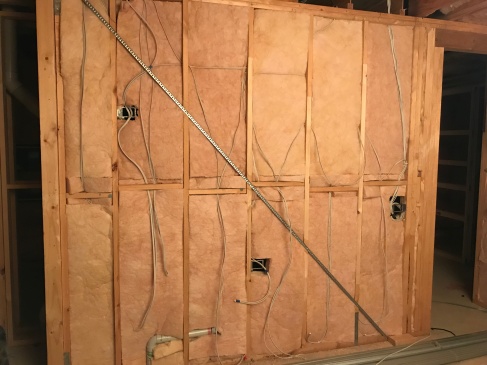 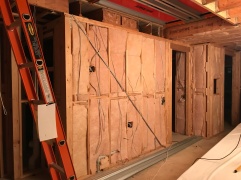 All the downstairs walls are insulated.